Will Smith’s Assault on Chris Rock, from a Chinese Medical Perspective 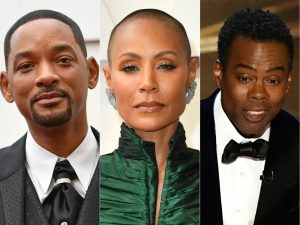 I couldn’t resist… Last week I was on the phone with my brother when we both suddenly remarked how weird it felt to be engaging in Hollywood gossip. I reassured him that it was understandable. We get a pass. This transcended the prototypical “Hollywood gossip”—a crime had been committed between two of our childhood idols, and something happened that no one had ever seen before: A live assault on The Oscars. Crazy.

Let’s begin with (Jada’s) alopecia. Chinese Medicine generally views this as “blood deficiency,” which may be a result of many causes:

From what I hear, there is a history of adultery on her part, which is bound to create resentment in her partner, Will. In Chinese Medicine resentment affects and is affected by the gallbladder meridian, the liver’s big brother, which of course means anger.

It means that once we express our anger (functionally) we can express our joy more freely, organically, a mechanism that summarizes precisely what most comedians do. It may also be in reference to the odd tendency some people have to laugh when their rage is triggered. Think hyper-confident, offended villain in Hollywood action movie about to retaliate upon his prey.

When enough heat builds up in someone’s liver channel it surges into their chest and mind, and feels irresolvable by any means but aggression. Surely, they shouldn’t hit their perceived enemy, but they must hit (or throw) something. If not a comedian, then a wall or a door. Many of us have been there. This doesn’t make it excusable, but those for whom temper tantrums feel more foreign and inorganic, it doesn’t necessarily make them more mature or evolved. From a Chinese medical perspective, they simply have less constitutional heat in the liver channel.

I can’t say whether Will Smith has heat in his liver channel, although he surely did in that moment. Herbs like gardenia fruit and gypsum might be indicated, followed by poria mushroom to calm the spirit and help his microbiome recover from the ensuing stress.

Neither can I say whether his wife’s alleged affairs were a result of sex addiction… but if they were the plot thickens much more than it has in any of her movies: Sexual addiction is most often a pattern of “yin deficiency,” which is synonymous with “liver blood deficiency!” All too apropos that she and her husband share yin and yang pathologies, respectively, around the same organ. I’m not sure who their present acupuncturist is, but it might be time for a second opinion.

As for Chris, I thought he handled it wonderfully, almost as if he were someone who is famous for handling difficult situations alone on stage. If his jaw was hurt by the assault I’d recommend physical trauma pills, Yunnan baiyao, to reduce inflammation and blood stagnation. These are important in the first 24 hours after any fall or injury. In case Chris experiences any lingering fear from the incident, this affects the brainstem, which fortunately can be treated by needling just above the upper lip, which might also aid in local facial healing.

Ultimately, it seems Jada’s yin and blood deficiency, combined with Chris’ heart fire, collaborated to stoke Will’s liver fire, and create “the greatest night in the history of television.”

Will Smith’s Assault on Chris Rock, from a Chinese Medical Perspective was last modified: June 22nd, 2022 by David Foster

This article was posted in Uncategorized. Bookmark the permalink. Follow comments with the RSS feed for this post. Both comments and trackbacks are closed.
646-242-7621 Directions Contact/Schedule