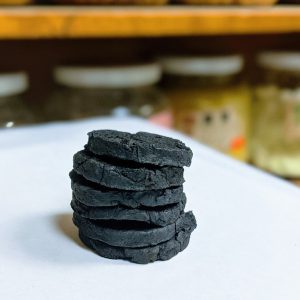 In my last weekend roundtable of case discussions with my group in Beijing, my teacher reminded us of the importance of sometimes inquiring how patients feel while digesting red meat. Whether they feel good, bloated, constipated, or otherwise, can inform us of the strength of the microbiome.

Red meat, like all foods in Chinese Medicine, is medicinal, but like any medicinal it is not perfect. Although there is no better food for building and nourishing the blood and body fluids, plus warming the overall gut, red meat is obviously a heavy material, more difficult to digest than most foods, and therefore should be dosed and prescribed mindfully.

This reminded me precisely of how we think of “shu di huang,” a Chinese herbal medicinal that is better known in the west as foxglove root. Foxglove root is one of the most important herbs in our pharmacopeia for building and nourishing blood—especially when the lack of blood has led to internal heat in the body.

The problem is if you look at raw foxglove root it looks like a stale old chocolate brownie. It is dense, heavy, and sticky, invaluable to certain patient patterns, but also difficult to digest; we are continuously reminded to not prescribe unless and until patients’ microbiome functionality is fully, or close to fully restored. It’s a rather simple connection: If someone feels bloated or distended after eating red meat they cannot yet handle foxglove root. If we make the mistake of prescribing it, they’ll likely come back complaining of worse digestive issues and no improvement of symptoms. We always must first rectify the gut before rebuilding blood. This is Chinese herbal medicine in a nutshell—or a stale brownie if you will.

We are now entering the time of year where red meat is most advisable, utilizing its sweet warming properties to balance the bitter cold of winter, as well as its fatty lubrication to counteract the dryness most evidenced on our skin or chapped lips.

However, it is important to dose properly—also whenever possible to intelligently design the remainder of each “formula,” which is to say plate of food. Since something like salmon is relatively easy to digest it can be consumed alongside more carbs and/or potatoes. On the other hand, red meat is better harmonized by cooked greens and light vegetables to aid in its downward movement. Beer and white bread will obviously have the opposite effect.

By all means take the following Eastern recommendations with a grain of salt (or pinch of sea salt atop your filet mignon this holiday season):

If you are a meat-eater and have never been to Quality Meats in Manhattan I’d highly recommend! My father always preferred The Palm II on 2nd Avenue, but I believe he was guilty of nostalgic attachment, as it was located a few blocks from his office of several decades.

This article was posted in Acupuncture, Diet, Herbal Medicine, Nutrition, Recipes, Traditional Chinese Medicine. Bookmark the permalink. Follow comments with the RSS feed for this post. Both comments and trackbacks are closed.
646-242-7621 Directions Contact/Schedule